An ETM with fried potatoes breakfast! WHAT? 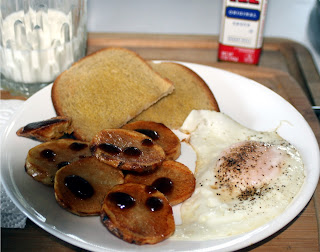 ETM stands for Egg, toast and milk. (My acronym for an often eaten morning repast)! This breakfast has a lot going for it... for the most part. Let me count the ways...

More than half the protein of an egg is found in the egg white along with vitamin B2 and lower amounts of fat and cholesterol than the yolk. The whites are rich sources of selenium, vitamin D, B6, B12 and minerals such as zinc, iron and copper. Eggs are close to a perfect human food as they are almost entirely absorbed in the small intestine. And yes, they are high in cholesterol, although recent research has shown the impact of that has been much maligned according to this WebMD post!

Since its gluten is less elastic than wheat's, and it holds less gas during the leavening process, breads made with rye flour are more compact and dense. Since it is difficult to separate the germ and bran from the endosperm of rye, rye flour usually retains a large quantity of nutrients, unlike refined wheat flour. Bottom line, rye bread is much better for you than white ever will be!

Whole milk is a rich source of calcium, a mineral essential for healthy bones and teeth. Cow's milk is also often fortified with vitamin D, which is also beneficial for bone health. And sure, 100 grams in a glass ain't all that much!

The above three come in at at diet healthy 234 calories and were I to leave it at that, I could pat myself on the back and move on. However, us guys have a way of mucking up even the most well intentioned efforts, and so I also like to often add in a serving of fried potatoes... so, sue me!

OK, I know we've all been rather brainwashed when it comes to eating French fries, but just hold on! My method of cutting a fresh Russet potato into slices and then browning that in olive oil is world's apart from the junk food you might get at McDonald's! Without going into too much detail, the potatoes made my way offer up a lot less surface area for the oil to cling to. In addition, I never burn them ( a really bad idea), but rather just get them to the cooked stage. These are then dried on a paper towel and sprinkled with a salt substitute. The end result is a high carb addition that many nutritionists can live with!

There you have it! This meal-a-deal came in at about 474 calories and was everything a growing boy needs to stay fit and trim.. now where did I put the chips and beer?

Notes: Other condiments used in this preparation were I Can't Believe it's Not Butter and A1 sauce!
Posted by Dan Owen at 9:03 AM