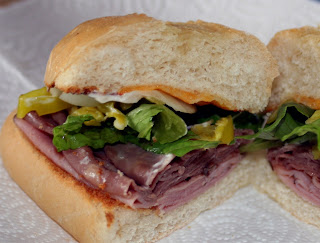 As much as I love going to Subway to eat, I don't always have the time or the cash. To fix that, I purchased some of the ingredients at my local grocery and made myself a homemade version of their Cold Cuts sandwich at home!

Now, while I only had a few ingredients, I made do as best I could. Here's what I had to start with:

I began by slicing the roll long ways, laid it open face on a rack in a convection oven set to broil and then sprinkled it with some shredded cheese. I then set the oven and waited about 2 minutes for it to brown the surfaces and melt the cheese.

Next, I removed it from the oven and added a layer of meats followed by the peppers and onions. Lastly on went a layer of lettuce fallowed by a slathering of mayo. This baby was then ready to eat!

The taste was great, the calories livable and it was easy to make to boot!

Note: A bolillo (Spanish pronunciation: [boˈliʝo]) or pan francés (meaning "French bread") is a type of savory bread traditionally made in Mexico. It is a variation of the baguette, but shorter in length and is often baked in a stone oven.
Posted by Dan Owen at 11:48 AM