Bagel thins! A new exciting bread idea or what? 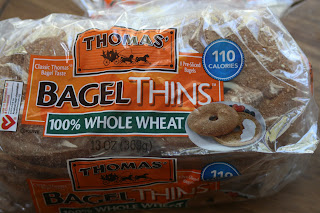 A friend recently gave me a bag of bagel thins to try out.  Apparently someone had the idea of taking a standard wheat bagel and removing the middle portion so all that was left was the tops and bottoms. This reminded me of the old Seinfeld series where Elaine was trying to sell the concept of eating just the muffin tops and leaving the rest for the homeless to eat! Not sure that worked out very well. 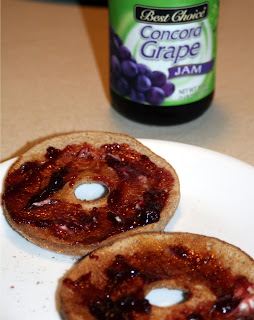 Since I had received a bag of these for free, I figured I’d give them a try. At just 110 calories compared to ‘normal’ bagel varieties with 350 calories, I felt I could even afford to spread on some jam and still keep things diet-nice.

Not one to wait, I went right ahead and tossed two halves into my toaster. A few minutes later, after slathering them with a pat of butter and some grape jam, I sat down to taste the result.

What can I say! It was similar to eating the end of a loaf of bread… in this case, wheat bread. While I’m sure there are people out there who like that kind of thing, it wasn’t for me.  While this may have been a good idea, I doubt that it will make it very far, especially considering how good a real bagel tastes!
Posted by Dan Owen at 4:00 PM