A tomato that's been raped! 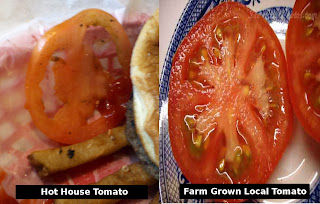 See that thing up there on the left? Leaning up against the edge of what's left of a basket of hamburger and fries is a slice of hot house tomato that no one in their right mind would ever want eat! What's a hot house tomato? Oftentimes it's a tomato that's grown in a greenhouse, not a farm, and brought to the point where it is still green (not ripe or mature) and is then assaulted by the introduction of Etheline gas to force it to turn red. Sounds sort of like fruit rape to me. These tomatoes, while they may look ripe, are still immature inside. That's why they taste so terrible and that's why I would never include one in my food at any restaurant.

Having said that, many tomatoes are grown on commercial farms that are located thousands of miles away in states like Florida and countries such as Mexico. Because of the great shipping distances involved, they are intentionally picked green and then shipped to distant locations where they are then given the old gas treatment to force them to ripen just prior to shipment to stores and restaurants. When they get to my favorite restaurant, the fruits are still firm (which chefs like as they can be cleanly sliced without all the mushy seeds falling out). So, in effect, in order to facilitate delivery the industry forgoes taste in favor of firmness!

How can one get around this problem and still go to a food joint to enjoy a really fresh sliced tomatoes on a hamburger or in a salad? Easy. Just grow your own an smuggle them into the restaurant in the summer time. During other times of the year, I've found that plum and cherry tomatoes make great substitutes!