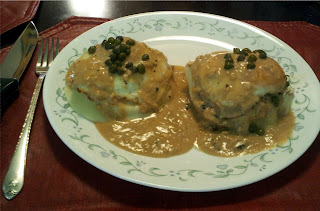 Fate, it was a cruel sort of fate, that brought me together with two denizens of the small town of Forsyth Missouri for a most unusual repast. A meal that may well live in infamy in the dark recesses of my mind. A festering sore that has changed my view of the 'Free Meal' forever. But, how rude of me. Let me begin by introducing myself. My name is Dan-O. I'm a mild sort of fellow with a quick mind and little to no sense. Then, there is Dan-E the Chef who prepared a most unusual breakfast this day in the early spring. Next, there was Coon-E. A quiet sort of man and buddy to Dan-E Da Chef. Rounding out the ka-tet was Tipper who is not actually human. She's a Labrador with a weight problem.

On this day, I was responding to what was billed as a sumptuous breakfast at Dan-E's home. However, in order to get said meal, I first had to go an pickup the Coon as he does not deign to drive. Fortunately, the Coon does not live far away. As a retired individual who chooses to live alone, he resides in a quaint one bedroom apartment that comes complete with a rocking chair. (Something I've found great use for as Coon-E does everything in slow motion). On this particular morning, I found him making coffee as I entered through the front door.

Knowing that I was fated for a long wait, I settled into the rocker and began to dose off. Off in the kitchen I could hear the assorted bangs and ringing of metal that men make when they work in unfamiliar territory. Time passe and a sunbeam that struck the floor by my feet made a slow transit across them. I think I fell asleep at some point.

Some time later, cane in hand, Coon-E was ready to go. We walked out to my Jeep, got in and made an uneventful trip of some three miles to Dan-E's place. On arrival, I got my first whiff of meal I was destined to eat. The smell that assailed my delicate nostrils took me back to a time when I worked in a fish market in Chicago. Uh oh. I thought to myself. Fish for breakfast!! 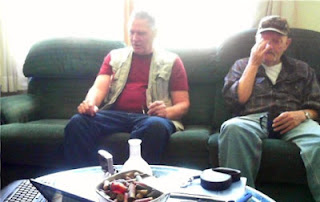 As this smell assaulted me, I sat down on a couch next to Coon-E. (A man who can move surprisingly fast whenever food is about to be served). The expression on his face was neutral although I thought I could detect a slight downward turn to the corners of his mouth.

“Oh, no!” Shouted Dan-E in a raised voice. “No eating in the Living Room! You guys will have to sit at the dinner table for this, my masterpiece!”

We both arose and then ambled over to the table. As I approached it, the smell of seafood became overpowering. “So, what are we making this fine morning?” I inquired as I took a seat at the table. Coon-E was seated directly across from me and also looked up as I made this innocent inquiry.

“Well, I so happy you asked.” Dan-E responded holding a spatula in one hand. “I think I'd call this creation a Lobster Cake Funderall kind of meal.” With this he presented me a plate that held two blobs covered with a dark gravy. I cautiously poked at one blob with a fork. “So, this is a Lobster CF Breakfast” I asked, tongue-in-cheek.

Dan-E, totally missing the barb, launched into a description of his creation. “What you have there is a layered pile composed of two halves of an English muffin, on top of which is a lobster cake topped with a slice of provolone cheese over which has been placed a poached egg.” He stopped to take a quick breath and to serve Coon-E his plate. “And, over all of that, is some of that great leftover deer gravy we enjoyed last week. Remember?” 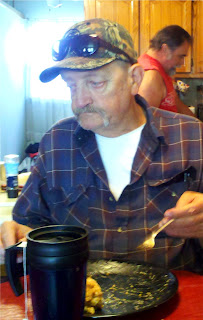 I surely did remember that meal. Gosh darn it, and I thought for sure I'd seen the last of that crazy deer meat gravy of his. (On that occasion he'd used it to cover some oven-burned biscuits. Biscuits that were so hard Coon-E had eaten only the gravy). I was interrupted in my reverie by Coon-E asking what the little brown dudettes were on top of the gravy. “Those are fish eggs.” I quipped. “Naw” intoned Dan-E. “Those there things are capers! I thought they'd add a little class!” Coon-E sighed and resumed eating, looking for all the world, like a condemned man.

That meal did get finished and I can now admit that it wasn't all that bad. Were it up to me I'd of eighty-sixth the lobster, but on reflection, I did get the benefit of some Omega three fatty acids.

Coon-E, bless him, ate all of his portion and even old Tipper may have gotten a lick or two of that durn gravy. Well, all's well that end well I say. Next time breakfast at a regular eating emporium will be my treat!
Posted by Dan Owen at 9:28 AM