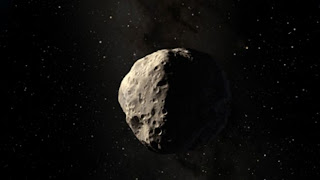 What’s bigger than half a foot ball field, travels at 8 miles a second and will skim over the earth’s surface on February the 15th at a height that will be closer than our orbiting satellites? Why it’s an asteroid you silly goose and it goes by the cryptic name DA14.

This is the closest any body of this size has ever gotten to the earth in memory…without impacting it that is. 2012 DA14 was discovered less than a year ago by a Spanish team at the La Sagra Astronomical Observatory, and initially stirred up a wave of doomsday worries. NASA quickly stepped in and quieted those fears, stating that while it will pass ‘interestingly close’, it should miss us. (This assumes that there will be no last minute perturbations to the asteroid’s orbit, of course)! HA HA.

At the time of its passage, the rocky intruder will be passing over parts of Asia, so even were it to slam into earth, it would more than likely miss North America. Its closest approach will be at 2:24 p.m. ET Feb. 15 and scientists say that were it to hit land, it would only be similar to a small atomic bomb. (Small comfort if you happen to live in a city where it hits)!
Posted by Dan Owen at 8:53 AM