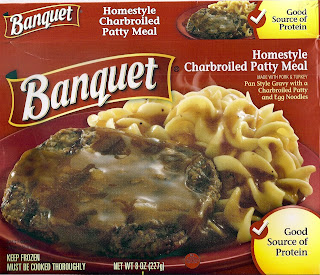 Back in March of 2011, I did a review of Banquet’s Zesty Smothered Charbroiled Patty Meal which also included some meat, potatoes and corn. This version (from the darker side), has substituted pasta noodles swimming in a dull brown gravy. Still costs only a buck, though, even in 2015!

This meal, at 227 grams, is comparable to the 2011 version by weight and the meat was also about the same size (and taste). This meal deal, however, was by no means either zesty or really smothered by anything more than a salt-loaded brown 'gravy'. (Perhaps it’s a recent casualty of the new ‘change’ our President has been talking so much about).

Nutritionally, you’re getting 310 calories, 26% of your daily fat, 40% of sodium and close to a 20% dose of cholesterol. A real winner, this one. Eat enough of these meal a deals and you’ll wind up on a cold slab in some morgue someplace. Other than that sobering news, this is not a bad dalliance if you happen to be starving. I actually liked the taste of the mix of pork and machine separated turkey mixed in chemicals and found the pasta to be just right. I gave it a 7 on overall taste and a -2 on healthy eating. Still, it’s only a buck man! I did think to try and improve the appearance of this meal by moving it to a regular plate and by adding a slice of toast!
Posted by Dan Owen at 6:12 PM