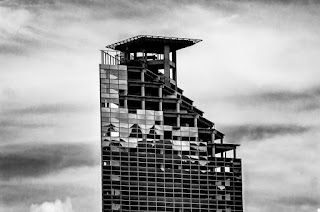 CARACAS, Venezuela—The government began moving thousands of squatters from the capital's infamous "Tower of David," a half-finished skyscraper that is emblematic of the country's decay during 15 years of socialist party rule.

President Nicolás Maduro's administration said it was moving the 45-story building's more than 4,000 residents for safety reasons. But local news reports say the building—known here as the world's tallest slum—was sold to Chinese investors who plan to turn it into a hotel and financial center.

Look closely America. This is the path you have been set on by the traitor Obama and which will be continued by Hillary.