Rockaway Beach MO – On what was the hottest day of the year (96°F), I decided to stop by a newly opened bar in Rockaway Beach Missouri which I had alluded to in a recent post. There were a few things I wanted to get straight as I was confused about some of the contents of an article that appeared in a local paper (Taney County Times). I wondered how a venue, with limited parking to begin with, was going accommodate two seemingly divergent activities, namely bar goers and a gas station! I did note that there were about 20 or so parking slips located right across the street in front of the Post Office.

As luck would have it, I needed some gas and decided to 'fill er up' prior to 'filling myself up', so to speak. I also wondered if perhaps I could just leave my car at the gas island while dashing in for a quick brew-ski or or two. (Just he sort of half baked plan I was often known for hatching...). That turned out to be a no go. 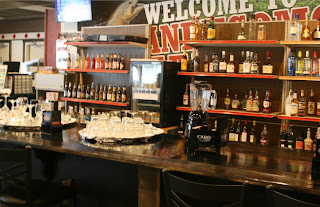 When I arrived, it was early afternoon and just in case you've never visited Rockaway Beach before, it's a rather quiet place. (In fact, driving through that town on a hot day reminds one of the Old West town of Tombstone, only with no sage brush tumbling down the street). The bar-slash-gas station, whose name newly minted name was the White River sports Bar & Grill, was barren of any traffic when I pulled in. Well, I thought to myself, it was a mite early in the day. At the last minute, I decided against getting gas as I was anxious to inspect the bar. And, my hands were shaking pretty badly; either from the DT's or a possible heat stroke. I thought a cold beer might help either condition. 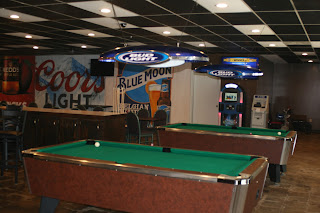 As I entered the establishment, I was met with a warm greeting from the Owner, a man named Al Al. There were also a couple of friendly patrons sitting at a well appointed bar with shelf after shelf of tempting libations only about four feet away. Al offered me an imported beer and I accepted - a welcome cold drink to enjoy while sitting in an air conditioned establishment! Life was sweet! Outside the temperature had just hit 95 degrees..

As I sipped my beer, I looked around and noticed that this was a very spacious bar complete with gaming consoles off by the front and two pool tables that looked brand new!  The numerous tables also hinted at food, and I learned that a great menu was in the works! Cool! 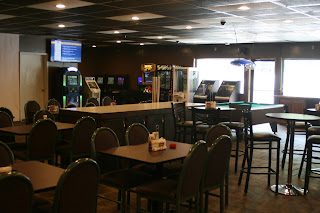 My main feeling sitting there, was that the White River Sports Bar and Grill was an extremely neat and clean venue!  Al also promised that the food service would be of only the highest caliber and I believed him. As a matter of fact, I plan to eat there on the Fourth of July, a date when the expansive out door deck will open and will host a live band. Stay tuned for that report!

The Face Book link for this bar slash gas station can be found here. Please like them and then give this venue a fair shake. 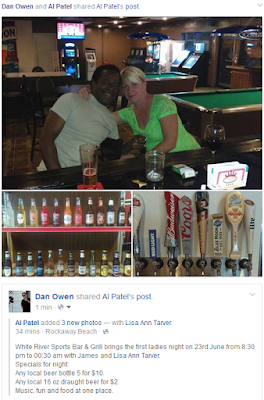