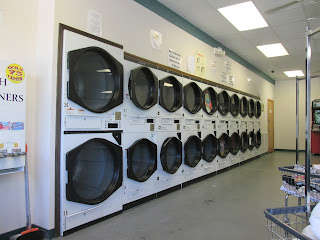 Located just to the north of Forsyth Mo is a popular strip mall that contains a pharmacy, vision, a Dollar General and a Subway among other businesses. Behind that building, though, was the object of my interest on this date. Located there is the White River laundromat! A place that seems to be well run and which houses row after row of Maytag commercial grade washing and drying machines, some of which can handle really large items! And, according to the sign, they are open 24/7!

After moving to a condo, recently, I was downgraded to a small stacked washer dryer combo that has done a good job with washing my clothes. However, it was simply to small to handle large loads like bed sheets and comforters! So, I headed on over to the White River Plaza located on Highway 160 to check out the laundromat I knew was located there. I'd written a post some years ago, but had never gone there to do actual laundry!

When I arrived, I'll admit to some confusion as to what machine I needed to use. Thankfully, there was a nice lady by the name of Roxanne there who was also doing her laundry. She apparently was a regular customer and she knew all the machines intimately and was kind enough to point me in the right direction.

Before an hour had passed, I had a clean bed comforter at a cost of about $5 including the cost of a packet of detergent! While I was there I noted that the place was spotless, had game machines, a coin changer, detergent dispensers and bathrooms! It was also a lot more busy than I thought it would be!
Posted by Dan Owen at 9:36 AM