Forsyth MO. -  A drive through three local parks on April the 5th under hazy skies, light winds and mild temps (65°F) was a pleasant experience early this spring 2019. I visited Empire District Park on Y Highway, Shadowrock Park off Highway 160 and it's sister park across Bull Shoals known as River Run. And while work 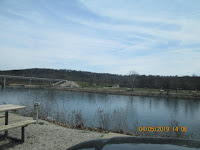 was going on to renovate the showers and bathrooms at River run, Shadowrock was up and running and was filling up with RV's! I had the impression that a good number of the people I say at both locations were fishermen taking advantage of the mild weather. The water levels were near normal levels at 659 feet and rain appeared to be limited for the next couple of weeks, so flooding was really of no concern.

So now would be a good time to get down and enjoy all of these wonderful locations. You can reach the park attendant by calling (417) 546-2876 to see about reservations in Shadowrock Park. River Run, when it opens, can be contacted at (417) 546-3646.