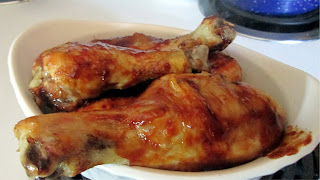 I've written at least one other post on making barbecued chicken in a counter-top convection oven in the past. This post was more or less a refresher for me.

After purchasing a package of Tyson chicken legs at a local market, I was anticipating making myself up a batch of barbecued legs for lunch. The total weight was 1.69 pounds for five pieces at a cost of $2.86.

Now rather than going through very many hoops, I simply washed the chicken, patted them dry and set the oven to 400 degrees. After it reached that temp on the roast setting, I placed the chicken on a grilling pan that had been sprayed with Pam. I then set the timer for 25 minutes and came back once during this cooking cycle to turn each piece.

After the 25 minutes were up, I lowered the temperature to 365 degrees and continue cooking for another ten minutes. About halfway through, I applied some barbecue sauce to all sides.

In order to achieve some browning, I change over to the broil setting for about ten more minutes.

My final finishing touch was to nuke those puppies on high for just over a minute. That was to insure doneness. The end result was heaven-ish. (Q: Does preparing chicken this way compare to outdoor grilling over coals? No way Jose)!
Posted by Dan Owen at 9:54 AM