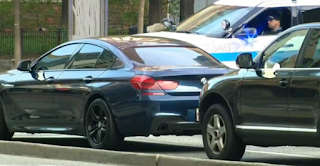 Chicago IL - A 22-year-old man died after being shot in the head Friday in the Loop.
A 41-year-old man told police that he was in his 2015 BMW when a 2019 Volkswagen driven by the younger man rear ended him about 3:15 a.m. in the first block of Ida B. Wells Drive, Chicago police said.

The older man got out of the BMW to see the damage, went back to get his cellphone and the driver of the Volkswagen approached him with a gun, police said.

The younger man demanded the keys to the BMW and pushed the man into the car, police said. The 41-year-old, who has a concealed-carry permit, pulled out a gun from the vehicle and the shot the man in the head.

He was taken to Stroger Hospital where he was pronounced dead, police said.
The shooter is being questioned by Area Central detectives.

No further information was immediately available.

Opinion: It is my hope that the perpetrator was not a black, a Democrat, an atheist or an ACLU activist! This could incite a riot in the streets of Chicago as a unjust action by that 22 yr old assumed white guy. If they were both black, that would be OK, as they are killing each other by the dozen every night. [Article from Fox 32]