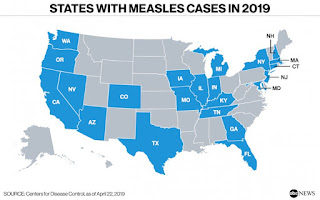 The number of reported measles cases in the United States have reached their highest level in nearly 20 years, federal health officials said Wednesday.A big part of the reason due to the 'misinformation' campaign to dissuade citizens from getting the vaccine.


There were 695 reported cases of measles across 22 states as of Wednesday afternoon, the highest since the disease was domestically eradicated in 2000, according to the Centers of Disease Control and Prevention.

The World Health Organization noted a 300% increase in measles cases worldwide earlier this month in comparison to the first three months of 2018.

"Stopping these measles outbreaks is a priority for CDC and we are working 24/7 to protect Americans from this contagious disease. Vaccination is the best way to protect against measles," the CDC said. "Today, the overwhelming majority of parents choose to protect their children with vaccines, and we’ve seen high and stable immunization rates in the U.S. for several years."
Posted by Dan Owen at 8:55 AM