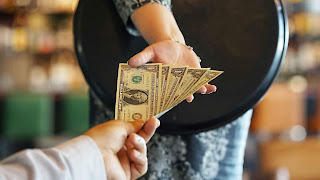 Tipping! A practice which may have originated in the taverns of 17th Century England, where drinkers would slip money to the waiter “to insure promptitude” or T.I.P for short—wasn't embraced by all Americans when the custom began to make its way into our country's taverns and dining halls until only much later.

Now, by definition, the word 'promptitude' means - the quality of acting quickly and without delay. In my view, that is now what it means today. In 2019, tips are expected no matter how tardy, lackadaisical or bad the services rendered! (Sometimes, it's like someone walking up to you, slapping your face and then demanding money for the 'service'). I've always personally felt that the whole persona of having to be tipped just to make a living is somehow Medievalish. As it is, many bartenders, servers and waiters are forced to go work in establishments that offer very little in hard wages, no insurance benefits, tough working conditions, and then which forces them to make up for their efforts by essentially begging!

And, whatever happened to the practice of tipping BEFORE you were served. You know so as to ensure that your service provider hustles a little bit faster than they would for others? Not happening these days, that's for sure. If I might borrow from the Bard – 'Bah. Tis a tale told by idiots! Full of sound and fury. Signifying nothing...'

In America service venues often pay their staff what is known as the tipped minimum wage, which is currently $2.13 per hour. ... But, even when the tips don't make up that difference, service individuals still make no less than the federal minimum wage ($8.60), because the venues are legally required to pay the rest (Fair Labor Act). That's the way it's supposed to go at any rate. So, a person who works about 40 hours a week will make about ($2.13 * 40 = $85.20 plus $258.80 = $344 even if they never got a single tip! I reality, service employees generally do make pretty good tips (17.12% of pre-tax product totals as a national average). And while things could be better, I would think that it would be up to the managers and owners to come up with improved perks to better improve their lives....
Posted by Dan Owen at 11:31 AM