A herbal roasted chicken throw down! 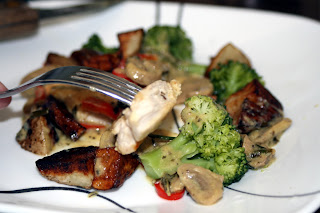 If you knew me, you’d understand the temptation I experienced when I sampled the Lean Cuisine Herb Roasted Chicken post from a few days ago. I wondered if I could create something similar from scratch that would rival this $2.50 packaged product in terms of taste, appearance and calories! No small undertaking as I was about to find out!

First off, let me list the major ingredients found in the packaged product:

All of these ingredients were presented as a 128 gram portion that contained only 170 calories! Yeah, that was going to be a challenge alright. I figured that the hardest part was going to be coming up with the herbal sauce, as I had no real idea of what they used for ingredients. So, I came up with my own and here it is….

My herbal sauce
These ingredients were simply added to a pan and brought to a brief boil and then were allow to simmer for a few minutes before being ladled over the entire presentation.
The chicken breast was placed into a Foreman grill and cooked until done. This allowed me to add those cute grill marks to the meat. After allowing the meat to stand for about five minutes (this helps retain the juices), I cut the breast into 35 gram portions.

The mushrooms, bell pepper and broccoli pieces were steamed together for 16 minutes in a steamer.
The russet potato chunks were first placed in the microwave set to high for 45 seconds and then they were transferred to a hot skillet that contained two tablespoons of butter. After browning, they were placed on a paper towel and lightly salted.

Once everything was cooked, I assembled all the ingredients onto a plate (see picture). The total weight of this creation came in at just 107 grams! Estimated calories were about 126 and the taste was just as better than the packaged product. Oh, and the cost was $1.75 per serving. Not bad at all!
Posted by Dan Owen at 11:16 AM