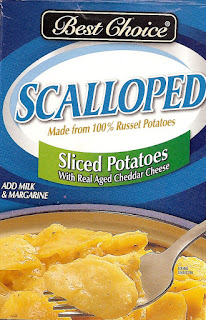 For someone who is still on a diet (me), I’ve some how been emotionally shanghaied by the desire to eat and critique more of the many variations of packaged potato offerings that are out there. Today, I’ve undertaken to write a post about this offering from the folks at Associated Wholesale Grocers (www.augbrands.com). The 140 gram contents supplies about 100 calories per half cup prepared (there are 5 of these portions per box). That’s the same number of calories as a recent post I did on a similar product made by Idahoan; a similar scalloped potato dish that came in at just a little bit more money and which offers up only 4 - ½ cup servings. Ah, I see some savings here! The thing is I’m not trying to pit one company against the other for just the difference of a few cents! What I am doing is hoping to catch a ‘comfort food’ that makes sense. (For the record, this box cost me $1.79 on July, 2012. It was purchased in Forsyth, Missouri and has an expiration date of May 30, 2013). Ultimately, I want to do a comparison between commercial boxed preparations versus homemade with respect to cost and nutrition. 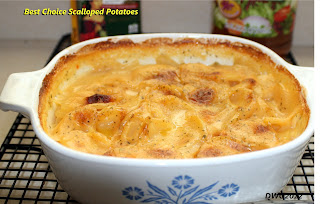 The instructions on the plain Jane box were pretty straightforward; preheat your oven to 400F, add 2 cups of boiling water along with 2 tablespoons of butter and ¾ cup of milk into a 1.5 quart baking dish. Next, stir in their little packet of ‘cream sauce’! Whatever that is??  Next, you add them dehydrated potato slices and stir the whole thing up. Bake this in a quart and a half oven proof container, uncovered, at 400F for 35 minutes or until them tatters are tender. (Note: if you live in the mountains; set your oven to 425F)! Side note: This package does have directions for the microwave and stovetop, but trust me, just do the oven deal if at all possible…

After baking, here’s the result! Very pleasing to the eye and the taste was on a par with most everything else I’ve tried. Gave this one a score of 8 and due to the extra quantity for a cheaper buck would recommend it to all.
Posted by Dan Owen at 11:20 AM