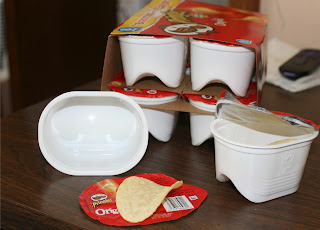 By now I think most everyone understands that the Pringle chip is not actually a potato chip at all. The company that makes Pringles starts with a slurry of rice, wheat, corn, and potato flakes and presses them into shape. So, technically this is not a potato chip in the most puristic sense of the word. Perhaps it would be better to think of it as a technochip.

I purchased one of the cute little eight packs that offer the consumer eight small containers that each hold 11 (or about a hundred calories worth of) ‘chips’. The container is made out of polypropylene (look for the number ‘5’ on the plastic container inside the little triangle) and so is considered safer than other plastics now in common use. (This plastic is routinely recycled although the truth be told we humans would be better off if the stuff wasn’t used to hold our food). Covering each tub is a piece of foil. All the little tubs are contained in a carton made of paper. So, that what I purchased for $3.15 not counting tax. That makes the contents (168 grams) worth about .53 cents per ounce. Pretty expensive snack, that!

My real problem with not only Pringles, but all the other ‘stackable’ chips is the enormous cost of making the elaborate mix of plastic, foil and paper that are required to contain them so that they don’t break! For the same amount of money, I could go out and buy a five pound bag of potatoes and make my own chips. Not only would I be getting far more for my money, but I’d also be doing a lot less damage to the environment!