As the drought worsens, the cost of food to increase! 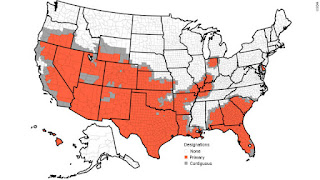 It’s mid July, (only mid July!) and already over 1,000 counties across the Midwest are being labeled ‘natural disaster areas’. As of Tuesday July the 10th , 61% of the lower 48 states were experiencing drought conditions -- stretching from Nevada to South Carolina -- the highest percentage in the 12-year record of the U.S. Drought Monitor. And, it was stressed by the National Weather Service, that these conditions could be expected to worsen before they improve. Also the prognosis for farmers and their crops, especially corn, looks grim as fields and pastures increasingly dry up according to the National Climatic Data Center.

Citizens can expect that many products at the local grocery store will suffer price increases and shortages of corn and corn related products begin to make themselves felt. Likewise, count on dramatic increases in the already high cost of meats and meat products as the wholesale cost of cost used to feed cattle increases.
Posted by Dan Owen at 10:40 AM