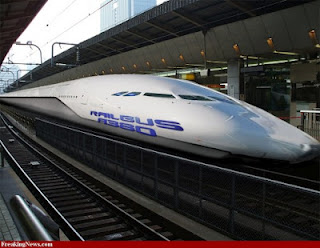 My Take: This project has lose lose plastered all over it. As long as any government entity has anything to do with an enterprise (AMTRACK comes to mind), it is destined for abject failure. Like the ‘Bridge to Nowhere’ this enterprise could well become a ‘Black Hole’ for a state already on the verge of bankruptcy!

Late breaking news: By a bare majority, the California state Senate voted to approve initial construction on the state’s $68 billion high-speed rail project, ending months of intense lobbying and uncertainty in the Legislature.

The approval was a major legislative victory for Gov. Jerry Brown, who lobbied lawmakers before the vote and celebrated with Democratic legislative leaders off the Senate floor immediately after.
The outcome was uncertain as recently as hours before the vote. With all 15 Republican senators opposing the measure and several Democratic lawmakers wavering, the California High-Speed Rail Authority and Senate President Pro Tem Darrell Steinberg scrambled to muster at least 21 of 25 Democratic votes.