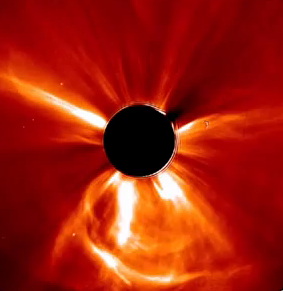 The heliophysics community is buzzing today in response to an article in Nature Communications, which describes an intense solar storm that narrowly missed Earth almost two years ago. On July 23, 2012, a CME rocketed away from the sun at 2000 km/s, almost four times faster than a typical eruption. The storm tore through Earth orbit, but fortunately Earth wasn't there. Instead it hit the STEREO-A spacecraft, which experienced the most intense solar proton storm since 1976. Researchers have been analyzing the data ever since, and they have concluded that the storm was akin to the Carrington Event of 1859.

"Had it hit Earth, it probably would have been like the big one in 1859," says Janet Luhmann of UC Berkeley, a co-author of the paper. "The effect today [on] our modern technologies would have been tremendous."

The Carrington Event was a series of powerful CMEs (corneal mass ejections) that hit Earth head-on, sparking Northern Lights as far south as Tahiti. Intense geomagnetic storms caused global telegraph lines to spark, setting fire to some telegraph offices and disabling the 'Victorian Internet." A similar storm today would have a catastrophic effect on modern power grids and telecommunication networks. According to a study by the National Academy of Sciences, the total economic impact could exceed $2 trillion or 20 times greater than the costs of a Hurricane Katrina. Multi-ton transformers fried by such a storm could take years to repair.

The paper in Nature Communications describes what gave the July 2012 storm Carrington-like potency. For one thing, the CME was actually two CMEs separated by only 10 to 15 minutes. Plus the CMEs traveled through a region of space that had been cleared out by another CME four days earlier. As a result, they were not decelerated as much as usual by their transit through the interplanetary medium.
The storm clouds crossed Earth's orbit in a place where Earth itself would be about 1 week later, so it was a relatively narrow escape. The whole episode highlights the perils of space weather. Many observers have noted that the current solar cycle is weak, perhaps the weakest in 100 years. Now we see that even a weak solar cycle can produce a very strong storm. Earth is not safe from these kind of events, so it's time to be prepared.

The above article was posted on http://spaceweather.com on this date....

My Thoughts: While we're all busy, looking for a lost airplane and as we try to come to terms with a sadistic Russian leader, off in the wings may lurk a real game changer! Massive solar flares, known as Class X CME's, can easily plunge our little world instantly into the Dark Ages virtually overnight!
Posted by Dan Owen at 5:01 PM

Email ThisBlogThis!Share to TwitterShare to FacebookShare to Pinterest
Labels: 1859, A plunge into the Dark Ages, Carrington Event, CME, Forsythkid