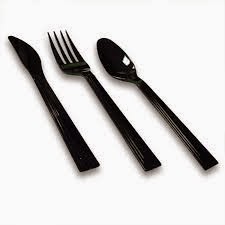 Backed by an increasingly progressive Obama administration, the FDA announced and executive action that will force restaurants to use only plastic flatware that is government approved!

Billed by the FDA as  safer and fairer , the special 'dark colored' flatware will be available for purchase, this fall, from select government outlets.

Already termed ObamaWare by an incredulous Congress, the regulation which was passed behind closed doors and without congressional action is sure to be a thorn in the sides of restaurants everywhere. Reid accused the Republicans of obstruction and then cited something about Bush as the reason they wouldn't go along with such a sensible move.

I spoke with one popular restaurant chain, Dan Obenski, who related that his 300 plus sites were going to have to raise prices 'across the board' in order to shift to the all plastic flatware. 'The fact this flatware can only be used once and then thrown away will vastly increase the cost of food to our customer base', related a frustrated Obenski.

Spokesperson, Josh Earnest stated in a press conference that Obama also planned for a new wing to the added to the FDA that would focus on a host of new and progressive regulations for the restaurant industry. When asked by the media if this would cripple an already ailing private sector, he merely shrugged...

Other legislation that is being considered by Obama would the be elimination of all tips as he feels there is 'too much shenanigans going on' with lost taxes due to under-reporting. A vast new group of special inspectors would be created all across the Nation to roam restaurants to 'make sure there is no infringement'. God bless Obama and his Progressive Left!

Yes, this was a work of pure fiction, yet with all the crazy things coming out of Washington these days.... who knows! Next thing you knows they'll want to outlaw backyard grilling... what's that you say! That one's true! see http://www.washingtonexaminer.com/backyard-bbq-emissions-targeted-in-epa-project/article/2561474
Posted by Dan Owen at 9:46 AM