Is the sky about to fall on Wallstreet? 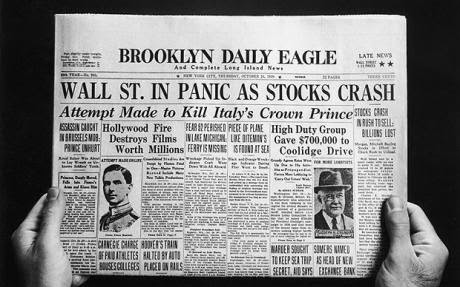 Fed Chair Janet Yellen said in a speech on Friday, March 27 that a rate hike, the first in nearly a decade, may be "warranted later this year," but any move would be dependent on the economic data, which remains weak by historical standards.

“The Feds recent message to the In Crowd” – You better get the hell out of Dodge because we’ve painted ourselves so deep into a corner this is probably the last time you’ll have a chance as to make gains in any upcoming quarter. For we might actually have to do what we implied (e.g., raise rates) regardless – just to keep up the appearance that we’ll do what we say. Even if so doing means – creating massive turmoil. So don’t say “we didn’t warn you.” (i.e., We’ve changed the meaning of “data” so many times now even we can’t figure out what it means or, what we should do any longer!)

Here are a few more paraphrased outtakes from the FED:

A first bite: “The economy has improved considerably, that’s why we need to continue the extraordinary measures we’ve been implementing.” WTF?

Or better yet: “We see continuing improvement in the labor force and expect even further improvement.” (As they seemingly disregard the only sector that provided all that month over month, year over year boost in honest job formations, e.g., oil related sectors in States which has now dramatically fallen off a cliff with massive layoffs already announced, as well as the possibly of accelerating further as the price of oil drops ever more.)

And last but surely not least, “We see continued growth in upcoming quarters of GDP.” (As long as you don’t pay any attention to the latest Atlanta Fed.’s report that’s downgraded its GDP forecast from just over 2% which by itself was pitiful, to now just 0.2% faster than one can say “everything was is awesome”)

Here's the real deal. This country is about to witness the single most massive meltdown of a financial system ever! The effects of which will be far reaching all over the world!

In my opinion, this forthcoming mega-disaster was crafted over time by none other than Barry Obama and friends. Obama, a man who history will not treat very kindly.

Material for this post was taken from an article by Mark St. Cyr.