California is the place to be – if you’re a budding journalist! 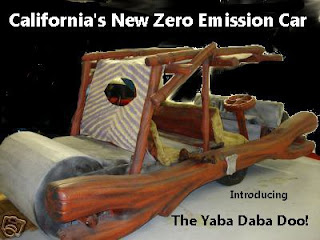 California is the place to be – if you’re a budding journalist!
I sometimes I think a young enterprising boy or girl journalist could make a pretty good living out just one topic: California itself! When I look at some of the wild hairs that live and breed in that Land of Oz, I see stories abounding! And listen up you would be journalists, there’s hardly a day that goes by without some insane mandate, law or standard is being hoisted up the flagpole just to see how long it is before civil unrest forces someone to haul it back down. Examples? You say you want some examples? OK, let’s take just this last week, shall we?

Earlier this year California decided to impose new ‘air standards’ that will require one in every seven cars sold in the state in 2025 be an ultra-low- or zero-emission vehicle. This basically means going to electric cars in really huge numbers. (An interesting choice considering the fact that you can hardly give one of those Chevy Volts away these days). And let us not forget the cost factor! Right now, at a time when increasingly both the state and its citizens are either dead broke or getting there, the legislature deems it a fitting time to place this added nail on the coffin. Good for them! And, maybe it will even work out! With many more people leaving the state than coming in, perhaps the air quality will improve after all!

Now, this just in. The California Energy Commission voted to adopt minimum energy efficiency standards for, wait for it, battery chargers. Seems they feel that with so many out there (about four charger per person), then perhaps the state could save a ton of energy by forcing its citizens to adopt (and buy) new ‘more efficient’ chargers. Now that’s what I call ‘progressive thinking’ at its best. Just when I thought the liberals had devised as many ways as there were to siphon more money out of the people. Along comes this well thought out scheme! According to Jill Notini, spokeswoman for the Association of Home Appliance Manufacturers, "It essentially means (charger) manufacturers are going to have to retool for California and they may have to retool again when DOE comes out with their final standard," she said. "There could be implications for cost of products and choice of products." Hey, that should be fun. Meanwhile, all those old chargers are going…you guessed it, into a landfill.

As I mentioned earlier, California just gets better and better every day and in every way. But, do hurry up and get your articles in, please. Rumor has it that we may be selling the state to China as a way of paying off a little of our debt. But, hey, that’s only a rumor!
Posted by Dan Owen at 10:12 AM