Recycling update: Experiment in on track! 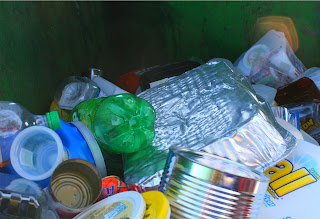 Update: Earlier in January of this year, I embarked on an experiment to try and track what the amounts and types of trash I was throwing out on a daily basis. Included were five groupings; aluminum, steel, paper, plastics, compost and miscellaneous. The first four were items my town of Forsyth Missouri accepts for recycling. My kitchen scraps went to a compost pile and everything else (including glass which the city does not recycle) was placed in a dumpster that will end up in a landfill. Not included also were things like yard waste (it's all recycled or burned) or items like clothing, electronics or whatnot. Most of that stuff is either donated or sold in springtime garage sales. (If something does go to the transfer station over the course of my three month study, then it will be documented as 'special items').

After some setup problems early on, I have managed to come up with a spreadsheet that seems to work OK. From it, I have now accumulated hard data that covers eleven days and which shows me to be discarding about a pound of stuff a day with only ten percent of that figure going to the dump. This, by the way, is considerably under the EPA's 2009 estimate of 5.1 pounds per person per day. I plan to hold off on posting actual quantities of individual items unto I have a full month's worth of data.
Posted by Dan Owen at 11:03 AM