When you buy something, consider what you must then throw away! 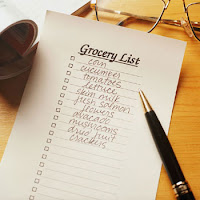 In times past, I would run over to the local grocery store with a scribbled list in hand to pick up just the ‘necessities’. Trouble was, I rarely stayed within the confines of my list, preferring instead to shop ‘til I dropped’. When I’d arrive at home, the car would be full of foodstuff, much of which would end up getting tossed within a week. You see, I was a man that planned poorly. (Actually read that as just an average man). 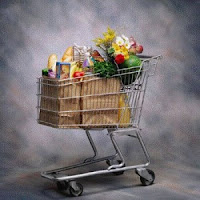 Then the depression of ’08 hit hard and things started to change. Poverty began to settle into my life the way arthritis settles into an old man’s bones. Painfully! Increasingly, I was forced to take note that my checking account would no longer allow for purchases of name brand goods like Del Monte and (the jolly) Green Giant. Instead, generic names like Always Save and Best Buy began to creep into my grocery cart with increasing frequency. I even found myself telling my friends that the generic crap was ‘just as good’ as the name brand stuff. (No, it’s definitely not)! I reconcile my hurt feelings with the thought that pretty soon no one (but the rich) will be able to afford the ‘good stuff’! Under a Socialist banner, we will have had to console ourselves with eating the ‘people’s food’ and liking it. Perhaps, I reasoned, by starting out in that direction now, I’d be way ahead of the game.

But, that’s not what I want to write about today! No, my concern, as of late, has been focused on getting rid of the garbage I was generating. You see, I also had to cancel my trash pickup service. (Yet another benefit of incipient poverty). It’s amazing to me just how fast all the junk builds up! (I think it was the EPA that estimates the average American citizen produces over five pounds of solid waste a day)! Not really a problem as long as you can pay someone else to haul it all off. A big pain in the butt if you can’t! 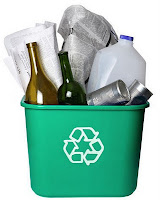 So, one of the ways I have discovered, and which works, is the concept of recycling. You see, it turns out that much of what we discard is actually worth money. Aluminum, for instance, can be ‘remanufactured’ after it is thrown out at only 5% of the cost of creating new metal from ore. The same hold true to some extent for paper, steel and certain forms of plastic! Now, while some locales in the nation will actually pay you hard cash if you separate this stuff into to piles, other areas will just settle for you dumping it for free.
That turns out to be de rigor for the town I happen to live in. So, the challenge now is to make sure that I pay some attention to the grocery store crap I purchase. For instance, I want to make sure that any plastic bottles fall into one of the ‘accepted’ plastic codes (1-7) that a recycler here will accept. I also want to avoid any glass products as they are not accepted in my area. If you get my drift here, I now make sure to only buy boxes, cans and bottles that I can end up throwing out for free. (After a while I’ve found it has become pretty much second nature).

The bottom line is that, while poverty sucks, it can also help make you a better person. I’ve become a much better shopper and recycler as a result, while cutting my landfill contribution down to a tenth of what it used to be!
Posted by Dan Owen at 12:41 PM