Earth and the moon from a million miles out.... 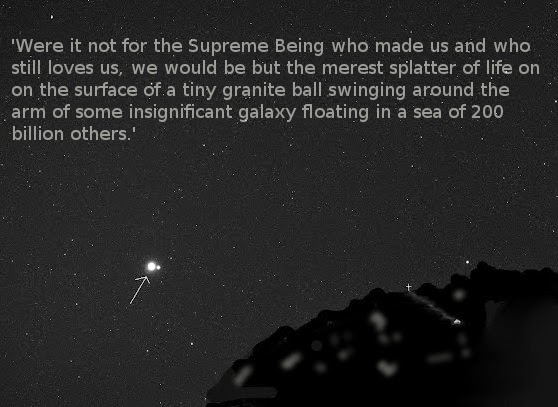 Hey! My name is DanO and I occasionally live on a distant rocky asteroid that is very dark, except for a lighted cross, just down a small path from my modest home. (One I built both over a long time).

Every once in a while, when I'm there, I will walk over to a small window and view the earth which looks a lot like a bright star a this distance.  No, it's not really a star, but a solitary planet along with its special moon. It's special, you see, as that moon was part of the ejecta due to a very remote collision and which gave Earth both a spin and a tilt. It gave the planet a 24 hour day and the seasons that allowed for the creation of life over billions of years. (Perhaps that was Gods' way of kick starting us all on our evolutionary path). Billions of years later, this world is now fighting for its very surival.
Posted by Dan Owen at 1:02 PM