The potato and cheese bomblette!

I decided on one cold and icky February day to make up a sample batch of slow cooker cheesy potatoes – a recipe I spied on Facebook a week or so back. 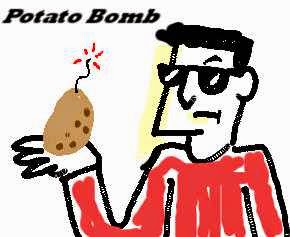 Rather than embark on the full blown recipe that would serve 6, I decided to throw together what I called a potato bomblette! A single serving amount that I could make ahead of time, keep in the fridge and then use when I was ready.

Place the bacon in a frying pan over med-high heat – cook until crispy. Break into small pieces.

Make a pouch of aluminum foil as shown. I used a small glass bowl to aid me with this. Coat the inside of the foil lightly with nonstick spray. Place a layer of potatoes evenly into the pouch. Top with little of the cheese, onion, Ranch Seasoning and some bacon. Repeat until you used all the potatoes. Hold a little of the cheese back for use later on.

Seal up the little potato bomblette and either store in the fridge overnight or throw right away into a slow cooker set to low for 7-8 hours (or on high for 3-4 hours, if your in a hurry). Remove, then carefully open the foil and plate. Sprinkle on the remaining cheese and nuke in the microwave for one to two minutes to just melt the cheese. Finally,  sprinkle on the chives and serve at once!

I went with the low setting and made this up at 10 AM one morning, then sat down to a steak and potato bomblette meal!

While the cheesy potatoes were good, I still prefer British fries - http://forsythkid.blogspot.com/2014/02/steak-and-eggs-at-home.html
Posted by Dan Owen at 7:19 AM