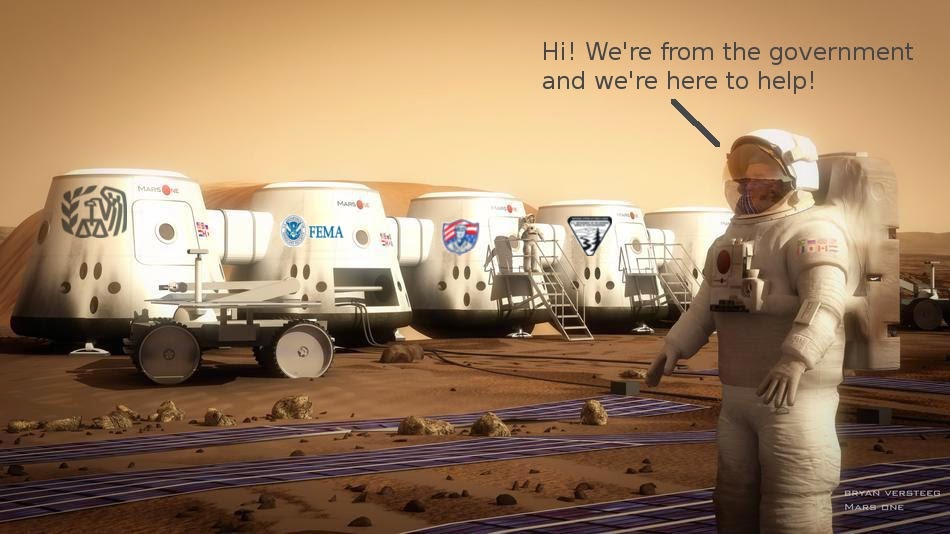 As it is beginning to look ever more likely that we will be sending teams of men and women to live on Mars in the coming decades, I wanted to be one of the very first to address the need for interplanetary Rules and Regulations! I'm pretty sure that there will be soon a pressing need for our great leader President Obama, to form yet another layer in the old and slightly smelly Federal Government onion. I personally would like this new bureau to be called the Federal Activities Regarding Trans-stellar Settlements or FARTS for short. Like most departments in our government, it could start out small and thus would have minimal impact for a period of time. Then later on, it can transform itself into something really, really big and useless. Therefore, I would refer to the initial bureau setup as a Mini-FARTS effort lead by none other than the man who brought us ObamaCare, President Baarrack Obama!


Now, even before the astronauts ever set foot on Mars, I would suggest the following. 1) We divide up the planet into electoral college zones for the purpose of future fair voting. You know like the electoral college map we use for voting here. A true paradigm of fairness -–just look at the last couple of Presidential elections and how well they turned out! 2) Next, we will need to ascertain property values and perhaps even a fair system of taxation to support said future dwellings. 3) And most definitely, before sending the first nefarious travelers, we might want to consider establish a strong police presence there to insure that all the Rules and Regulations are followed! Oh, and that would mean a whole herd of attorneys to interrupt the law be present also. 3) In order to properly house all these professionals, a large task force of building code inspectors must be there in order to make sure of such things as building permits, licensing fees and Federal taxes are properly and fairly applied. And finally, 4) we'd surely need the IRS present and accounted fond watching our every teensy move. That done, I feel the planet would have the very barest of Federal presence to insure that everyone arriving there would be treated evenly, fairly and forever protected from harm.

Now, mind you, these are just a few opening thoughts. I would invite everyone to send Obama their thoughts on this topic!
Posted by Dan Owen at 12:28 PM