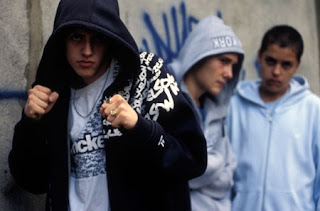 I know it might be hard to believe, but I believe I have seen evidence of gang related activity in the small Midwestern town of Forsyth, Missouri.

Just a year ago, a man was viciously attacked and then robbed while walking home along Highway 160; a main road that runs through the heart of Forsyth MO. Then, just a few days ago, I accidentally ran into a group of youths while also walking in the same vicinity of the previous attack. My gut instinct told me that these people meant trouble and so I deftly crossed the street and ducked into a neighborhood bar and grill. I felt I had really ducked a bullet on that occasion....

If there are gangs roaming the streets where I live, I'm guessing they are more active during the nighttime. It's after the sun goes down that the problems seem to occur. A talk with a local police officer was not very revealing as he tended to duck the question of crime, telling me that 'it was about the same everywhere'.... What did he mean by that?

I's my personal theory that part of the problem centers around a failing economy (no jobs) and the collapse of the core family with many children coming from broken or other wise dysfunctional home environments.

The question remains to see if the problems will increase, over time, as our nation continues its slide into 2nd world status.
Posted by Dan Owen at 6:18 PM