Our Wheel of Destiny! 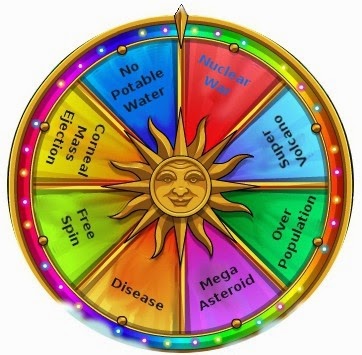 Even as many environmentalists today raise strident voices over concerns of global warming, a few little people such as myself embrace the concept wholeheartedly! You see, it takes money to heat ones home in the winter where I live. And, if the winters are getting milder due to all the carbon we humans are throwing into the air, I can live with that. 'Let the coal-fired plants rage full force', I would shout!

After all, it's a no-win situation that humanity now finds itself in, anyway. Even though America has made great strides in improving its air quality, other countries, like China and India with their billions of citizens have quickly erased any progress we've made. (And, with new coal-fired electric plants coming on line almost weekly, don't expect to see much in the way of improvement). Meanwhile, Third World countries are slashing our world's rain forests and burning them just as fast as they can go! (And, when they're not doing that, they're copulating like crazy making about 358,000 babies each day)! Even with those who die (about 155,000 each day), we're still on a pretty steep growth curve!

So, rather than having a conniption fit over global warming, forgive me if I am focusing on other factors that could well see the extinction of not only Western Civilization but even of mankind itself!
Posted by Dan Owen at 7:38 AM