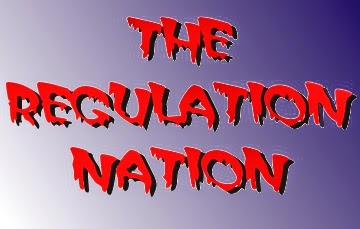 What's the one thing this nation has way too much of?

Some might say politicians. According to a 1992 Census Bureau study, there were over half a million. And, while the bureau never repeated the study, it might be a safe guess to be talking a figure in the millions today.

What do all these politicians do... exactly?

They pass lots and lots of rules and regulations! There Federal regulations, State regulations, County regulations and even regulations specific to the town or city you live in being added daily. How many are there on the books today? Hard to tell. In an example of a failed attempt to tally up the number of laws on a specific subject area, in1982 the Justice Department tried to determine the total number of criminal laws. In a project that lasted two years, the Department compiled a list of approximately 3,000 criminal offenses. This effort, headed by Ronald Gainer, a Justice Department official, is considered the most exhaustive attempt to count the number of federal criminal laws. In a Wall Street Journal article about this project, “this effort came as part of a long and ultimately failed campaign to persuade Congress to revise the criminal code, which by the 1980s was scattered among 50 titles and 23,000 pages of federal law.” What's for sure is that you might breaking the law and not even know it! Let me go to a case in point.

From law-biding to felon in one small hop!

Example: Susie Simple lives in a small home where she had been supporting her grandfather right up to the point where he died. In the bathroom cabinet are a few bottles of prescription drugs that granddad used to take. All are considered controlled substances and now they are in the sole possession of Susie. Should her premises get searched by the police and the pills discovered – it's a Class C felony charge!

Boom! Susie has to post a 10K bond for which she ponies up a thousand dollars she doesn't have. She's told she has a 'bond hearing' in a few weeks and is advised that she might want to secure an attorney. Boom! There goes a $2,500 retainer fee for an attorney who will spend most of his time sitting on his butt. Susie makes it to court with her attorney and one of two things happen; a plea bargain reduces her sentence to a misdemeanor with a multi-year probation or the felony charge sticks (bad attorney) and Susie faces up to seven year in prison and a $5,000 fine! Congrats Susie! Boom! You are now a convicted felon and that title will haunt you the rest of your life!

OK! I know you're wondering, what are the chances? Well, it just happened to a friend of mine just a few weeks ago. Only, in her case, there was a creep boyfriend in place of a nice old granddad....
Posted by Dan Owen at 8:00 AM