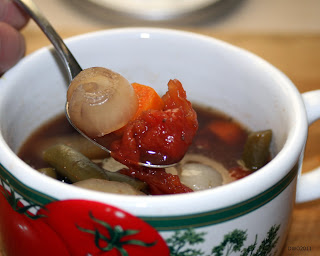 One of the recipes I make when alone - which is quite often - is a simple vegetable soup that may or may not have beef (depending on if I can afford it). It meets all the requirements of a lazy bachelor like myself; fast, simple and easy!
For ingredients, I will generally add the standard mix of potatoes, onions, carrots and green beans to a mix of water and chopped tomatoes. From that point onwards, it pretty much depends on what catches my eye at the time. Generally speaking, I will add a little oregano, cayenne pepper (go easy) and garlic to this witches brew. They give the finished soup a little sparkle, I think. I will also add in some basil, either dried or fresh.
As far as amounts go, I pretty much stick to one medium russet potato, a can of chopped tomatoes, two cans of water, two carrots, a couple of small onions and finally a can of green beans. Other candidates would include corn, turnips and peas if I happen to have some lying around.
All of these go into a very old slow cooker that I inherited from my parents many moons ago. I do have newer (and better?) crock-pots somewhere in the back of a lower cupboard, but they are larger in size and would require me to make more soup than I would want. In general, I like to make just enough for about six servings. (After that, I’ll likely grow tired of it and will toss the remainder out).
Once everything is added, the slow cooker is set to low and then forgotten about until the marvelous smells coming from the kitchen remind me to check it. So, about six hours later, I’m ready to sit down and enjoy one type of ‘comfort food’ that also very good for you to eat!
Posted by Dan Owen at 12:33 PM