When the Flu and Staph work together! 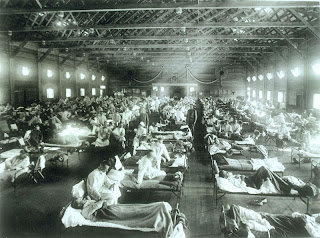 Back 93 years ago, in the spring of 1918 a terrible flu burst forth on the world in three distinct waves. The first, in the early spring was relatively mild with most people that were affected recovering quickly. The second wave, however, proved deadly beyond all previous experience with as many as fifty million perishing across the globe. This outbreak was then followed by another milder version in the spring of 1919 before finally burning itself out.
It’s that second wave that has received much in the way of research over the years. Most scientists are convinced that the large number of deaths were due to a novel re-assortment of key flu genes that created an infectious bug that was so new that mankind’s immune system had no way to address it. When that happens, as it has about every twenty years of so, a pandemic occurs. Some pandemics are mild while others like the one that occurred in 1918 are extraordinarily severe. Because the influenza virus is constantly mutating, health officials fear that a re-occurrence of the so-called Super Flu is not a question of if, but of when. Lucky for us, here in the United States, scientists also postulate that when that day arrives, the mortality rate would be much reduced due to the capabilities of modern medicine. A very comforting scenario if true, but what if it’s not?
The 1918 Flu may or may not have worked alone!
The belief that we would all be better off in the face of a major pandemic would probably work were it not for one interesting fact. Mother Nature is known to stack the microbial deck in ways that scientists find constantly surprising. She may have done so even back in 1918 and we still might not be aware of it. Consider, if you will, the bacterium known as Staphylococcus aureus (SA), a ‘germ’ that has lived with us over tens of thousands of years. At any one time approximately 1 in 3 of every American harbors this bug most with no ill effects.  SA, however, knows the layout of our immune system very well thank you, and over the centuries has developed ingenious ways in which to survive when under assault. Thanks to the bacterium’s habit of sharing snippets of genes with other bugs (known as cassettes), it has developed a wide array of abilities to both defend itself and to inject deadly toxins (over seventy) into its host when certain conditions are met.
One very interesting component of SA that I came across in some literature a while back was the existence of a certain set of genes that produce a toxin called Pantone-Valentine Leukocidin (PVL). It was initially discovered by Van deVelde in 1894 due to its ability to lyse leukocytes. It’s thought that the genes were originally inserted into the SA’s genetic code by a phage, a form of virus. The two genes that make the toxin exist at separate locations and only seemed to become ‘turned on’ under certain circumstances. Otherwise, they sit around innocuously waiting for conditions to change.
[An interesting side note is that an old strain of bacteriophage known as Staph 80/81 containing PVL has been found in cow’s milk and, in more recent times, SA contain PVL has even been seen in breast milk. All of which begs the question as to whether or not this gene had a role in the high mortality rates experienced in the 20-40 year old group of men and women during that pandemic.]

When you look carefully at a graph of the mortality curve of a ‘normal flu’ year, you will note that the cases generally fall more towards the very young and very old; two classes of a population that typically have compromised or weakened immune systems. 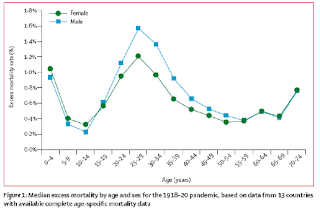 Then, when you look at the death curve for the 1918-20, you see a new bump right in the middle of the 20 to 40 year old group. Men and women who were right at the peak of their ability to fight off disease due to robust immune systems. It’s obvious that there was something more at work for this group of people than was the norm for flu. Autopsies that were performed on the ones that died quickly revealed that in the majority of cases, they were suffering and had perished from a particularly virulent form of pneumonia. In point of fact, the lungs of some patients were soggy masses; filled with as much as two quarts of fluid! What killed them was not so much the destruction of their lungs vis-a-vie the flu or even pneumonia as it was that they drowned for lack of getting enough oxygen! This, then, was what separated the 1918 flu from all that have come since. If you were to subtract the middle group from the curve, you would have said that while that flu strain was severe, it was most certainly no more so than other strains that have hit the population prior to or since 1918.
The fact that as many as one third of the population was infected with SA at any one time is, I think, one of the key factors that caused the loss of life to unfold as it did. It was not the single effect of the flu bug that brought quick death, but rather the one-two punch of the Flu and Staph together that did the trick.
Other factors may have also driven up the death rates even higher than they would have been otherwise. At that time, there were no antibiotics available to treat pneumonia and so what is now a treatable condition was left to run its deadly course. The conditions of a global war also existed then, I’m sure this helped in a more rapid than would otherwise be normal spread of the flu virus. World War I was just winding down and massive troop movements were then occurring in America, Europe and Canada. Conditions that created a synergistic effect when combined with what by today’s standards were poor sanitary conditions for many of the countries working poor, most of whom were immigrants.
The question is what happens now, when we live in a world with even more deadly strains of Staph like the one known as MRSA?  I’ll pursue that a bit more in part two.

Notice: The post written here is the sole opinions of the author of Forsythkid. This piece is a work in progress and as such will be revised fairly often.
Posted by Dan Owen at 7:28 PM