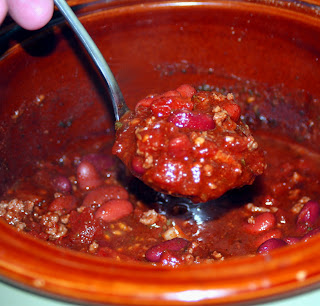 Even though it’s still pretty warm outside, the imminent approach of October always gets me to thinking about how good a nice bowl of, chili con carne or Big Red, would be right about now! But, not just any chili, mind you, it’s got to be chili made my way! Over the years, I’ve made many a recipe. Everything from Cincinnati Chili to a Submarine Chile served to the men under the waves in WWII. (Just imagine all those sailors living together in cramped quarters after a meal like that)! I’ve even gone as far as to buy a book or two on the topic. But, in all that time, there is one recipe I keep coming back to, time and again. Here it be:

In a slow cooker set to low, add the slow cooker chili mix, diced tomatoes, tomato sauce, stir and cover. Brown the ground beef in a in a skillet and drain off the grease. Add the meat to the sauce mix min the slow cooker. Add the rest of the ingredients, re-cover and cook on low for about eight hours. Serves 6 to 8.

As you can see, this is a pretty no-nonsense recipe for what is a hearty chili. And, for this particular deal, I was lucky to have some ripe bell peppers, still on the vine, in the garden along with plenty of basil. The onions were also leftover from some that I had grown this summer. Lacking those items, I might have made a trip to the store or then again maybe not. The thing with me is that I’ll use whatever I happen to have on hand, so this recipe changes a little from time to time but it always tastes great! I also had a little bit of ground beef left over which will be mixed with some taco sauce, stored in the fridge and used in soft shell tacos at a later time.
Posted by Dan Owen at 5:33 PM