The case for cast iron kitchenware! 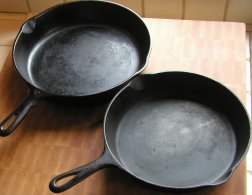 Like most older people, sometime long ago, I stopped using cast iron pots and pans in favor of the Teflon coated stuff. They were cheap, non-stick and did only a mediocre job of cooking food. Their chief benefit was the no stick think. The biggest handicap, although I was not to learn this for a long time, was the inability of the aluminum to hold and distribute heat evenly. Something that cast iron does to perfection.

The biggest turnoff, for me concerning the use of cast iron ,was how stuff would stick and the pain it was to have to wash and immediately dry off the metal lest it rust. The thing was, I had no clue as to how to properly season and maintain this most wonderful cooking utensil! Once, I 'learned my lesson', I have since dumped all the Teflon crap into the garbage and now exclusively cook with cast iron.

Now, I simmer, braise and sear to my hearts content and without a care in the world. I've gotten to this point by taking the time to understand the metal and by treating it with respect. The first thing I learned was how to properly season a new cast iron frying pan.

Seasoning
A seasoned pan has a stick-resistant coating created via the creation of polymerized oils and fats. Seasoning itself is a process by which a layer of animal fat or vegetable oil is applied and then literally cooked onto cast iron or carbon steel cookware. This layer protects the cookware from rusting, provides a non-stick surface for cooking, and prevents food from interacting with the iron of the pan. Ergo, two of the problems I was having with this type of cookware was fixed right from the get go. Note: If you elect to cook any high acid foods like tomatoes in your seasoned iron skillet, be sure to re-season it as the acids will destroy the protective oil layer.

Other Benefits
These days, when I cook eggs, they actually float on the surface of the meal. No sticking at all! Even to a better extent than most of the Teflon jobbies. Cleanup is simple too. A quick dunk into warm soap water, a rinse and a wipe off with a towel and I'm good to go. As I said the trick is to properly season the metal the first time and then with repeated use it just gets better and better. Make sure you click on the 'seasoned pan' link to see what I mean.

Three other reasons I like this kind of metal are as follows:
So, if you have some cast iron stored away some place in your kitchen or attic. Get it out and rediscover something that your grandparents already knew. As a side note, check on the bottom of your skillet; if it says Wagner's or Griswold, you may even have a collectible.

Disclaimer: All opinions expressed in this posting are the expressed opinions of the owner of this blog.
Posted by Dan Owen at 9:52 AM