NASA’s satellite is coming down to a town near you baby! 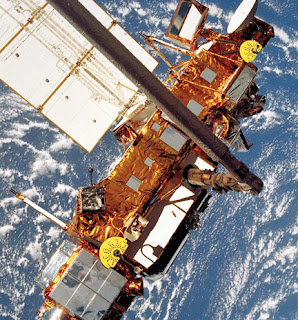 A six ton behemoth, as big as a fully loaded bus, will be making its fiery entrance into the earth’s atmosphere sometime on Friday. Scientists have now picked the like debris field to be in or around the small town of Forsyth/Rockaway Beach, Missouri. 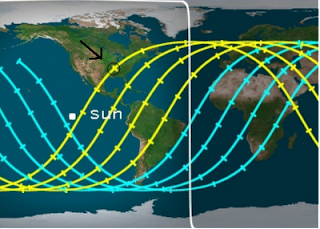 The UARS re-entry "is something to be particularly worried about if you live near the impact zone. I’m estimating as many as 26 objects with some weighing in at 300 pounds will slam into the earth at meteoric speeds” , said Dan Owen, a not well-known satellite watcher whose past computer analysis and predictions (which he derives mostly from a worn out Ouija Board) have puzzled scientists for decades. Dan went on to state that the highest concentration of space rubble will also, not only be flaming hot, but highly radioactive as well. “So,they will be hot hot hot!” He admonished.
Mr. Owen went on to say that anyone hit with debris (assuming they live) needs to contact the government post haste. They will want their junk back, so no hoarding! The government is also disclaiming any responsibility for any damage done to houses or other structures as they consider it an act of God! As for the area impacted by this mess, one official is telling residents to think of this as 'like winning the lottery'.

Disclaimer: This posting is purely an act of fiction and is intended for entertainment purposes. The best guess as to where the debris will land is some where over the ocean between Asia and Australia. The odds of a person getting hit at calculated to be on the order of 1 in 20 billion or so.
Posted by Dan Owen at 8:37 AM