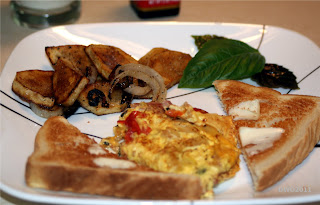 As that which has defined most of my sorrowful like, I have here a breakfast designed to put one in an early grave; fried potatoes and an egg omelet. Ah, but not quite the mega-cardiac disaster that you would suppose. Instead of the aortic busting, cholesterol laden standard egg, I’ve elected to go with Egg Beaters instead. For this meal I pulled out an old cast iron skillet. These old guys have the advantage of maintaining heat and so do a great job of frying the potatoes touté suite.
Ingredients:
1 container of egg beaters
1 medium potato
1 slice toast
1 slice ham
1 slice American cheese
1 cherry tomato
3 tblsp oil
1 pat of butter
Directions: 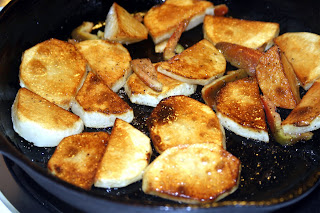 In a large frying pan, add oil and bring to moderate high heat. Peel one potato and cut into thin ‘dollar’ slices. Dry the potato sliced on a paper towel prior to adding to the hot oil. Nuke the potato slices for one minute on high.
Once the oil is hot, add the potato slices and cook one both sides until brown. After a few minutes add the sliced onion. Once brown, remove to a paper towel and lightly salt (I used a salt substitute).
After potatoes are removed from the pan, allow it to cool then add the egg beaters. Tear up the slice of American cheese and layer these over the top of the eggs. Do the same with the ham.
Once the egg has ‘set’ in a minute or so, carefully pull one side over to form an omelet. Cook for another minute then remove to a plate. Start the toast while allowing the egg omelet to rest.
Just prior to serving, nuke the potatoes for a minute to reheat them and then do the same for the egg omelette for about 20 seconds or until done. Serves 2.
Posted by Dan Owen at 9:56 AM