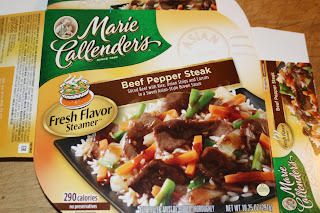 After drudging around in the world of bargain basement 'TV Dinners from Banquet' for some time now, I decided to kick things up a notch by selecting a High Quality Meal. It's not that I'm getting tired of the buck-a-meal deals from Banquet, it's just that after a while, they all taste pretty much the same...cheap!

Product Description:
My selection for today is a Beef Pepper Steak from Marie Callender. Apparently, it's an Asian version.

The distributor, incidentally, turns out to be ConAgra. These folks have a pretty extensive line of products: 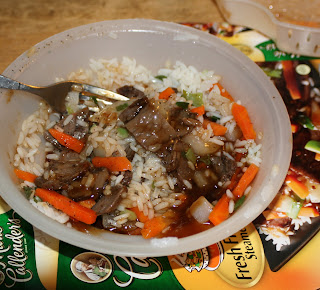 Minnusha:
What surprised me about this meal was the cost; only $2.69! Not too shabby that. The MC website even had a coupon you can print out (as of September 2011) that will get you a dollar off if you buy three dinners.
This is one of the more complex meals in that there are two parts that are involved; a basket and a steamer basket. But, for all that it was also one of the easier meals to make in the microwave.

Ranking:
OK, so if you've read my reviews on other dinners, you'll know that for me it's all about the taste. I've had my fill of the overly dry, salty and sometimes disgustingly chewy creations like Banquet's Chicken Fingers meal. (Good God, what a disaster that mess in a box is).
Since I'm now moving up to higher echelon meals now, I thought I would also spruce up my rating system, so here goes. All six categories are on a scale of 1= disgusting to 10 = orgasm:
Box art:    8    The art department did a nice job!
Reality:    7    What you see is what you get!
Cost:        8    Very affordable for 2011.
Smell:      7     Good overall aroma!
Texture:   9    Rice and veggies and even the meat was perfect!
Taste:      6    Good solid taste. A definite Asian flavor.
Average: 7.5 A very good ranking for fast food!
All together, a very good meal for the money. And, only 290 calories too! I also really like the way they do the steaming basket thing. I'm thinking of trying a couple more of these and will post the results when I do.
Posted by Dan Owen at 5:03 PM