Dr. Thomas Sowell and his thoughts on the OWS organization. 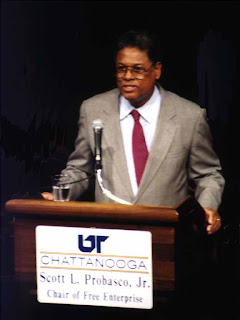 [here is a letter that was published concerning his thoughts regarding the OWS]
The current Occupy Wall Street movement is the best illustration to date of what President Barack Obama's America looks like. It is an America where the lawless, unaccomplished, ignorant and incompetent rule. It is an America where those who have sacrificed nothing pillage and destroy the lives of those who have sacrificed greatly.

It is the America that Obama and the Democratic Party have created with the willing assistance of the American media, Hollywood , unions, universities, the Communist Party of America, the Black Panthers and numerous anti-American foreign entities.

Barack Obama has brought more destruction upon this country in four years than any other event in the history of our nation, but it is just the beginning of what he and his comrades are capable of.

The Occupy Wall Street movement is just another step in their plan for the annihilation of America.'

"Socialism, in general, has a record of failure so blatant that only an intellectual could ignore or evade it."

Thomas Sowell
Thomas Sowell (born June 30, 1930) is an American economist, social theorist, political philosopher, and author. A National Humanities Medalwinner, he advocates laissez-faire economics and writes from a libertarian perspective. He is currently a Rose and Milton Friedman Senior Fellow on Public Policy at the Hoover Institution at Stanford University.


Sowell was born in North Carolina, but grew up in Harlem, New York. He dropped out of high school, and served in the United States Marine Corps during the Korean War. He had received a bachelor's degree from Harvard University in 1958 and a master's degree from Columbia University in 1959. In 1968, he earned his doctorate degree in economics from the University of Chicago.


Dr. Sowell has served on the faculties of several universities, including Cornell and University of California, Los Angeles, and worked for "think tanks" such as the Urban Institute. Since 1980 he has worked at the Hoover Institution. He is the author of more than 30 books.
Posted by Dan Owen at 12:19 PM

Email ThisBlogThis!Share to TwitterShare to FacebookShare to Pinterest
Labels: Danomanno, Forsythkid, Thomas Sowell on the OWS