How long can North Korea hold out? 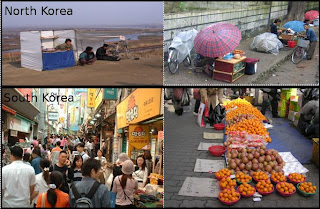 The fact that North Korea has limited or no electrical infrastructure has bothered me from time to time. You see, I just didn’t understand why. Most every other country, rich or poor, has something like an electrical grid even if it doesn’t operate on a full time basis. Not so North Korea and I think I just realized why. It’s all about control.

It was the death of Kim Jon Il and the ascension of his son that finally made it clear to me that the leadership uses the lack of electrical power as a means of control. No electricity means no television or radios. The only broadcasts come from special state run programs in select locations. Not that the average citizen could afford either a radio or a TV, mind you. Not on an average $150 a month handout from the government they can’t. The lack of money and of even decent plumbing is designed to keep the people busy. Busy trying to barely survive while the central government skims just a little off the top of each and every citizen. Labor and goods, that when added up, lends to a pretty nifty life style for the few at the top.

What we have, then, is a socialist state carried to the extreme; an entire people who are under the iron fist of a despot ruling class. A society that affords a bare sustenance living to the old while simultaneously forcing the young to work for the state. A society that I believe may now be coming apart at the seams.

Take a careful look at the pictures; both the North and the South. To the north you see extreme poverty, starvation and hopelessness. To the south, you see a vibrant and energized populace with plenty to eat. Which side would you want to live on?
Posted by Dan Owen at 10:23 AM

Email ThisBlogThis!Share to TwitterShare to FacebookShare to Pinterest
Labels: Danomanno, Forsythkid, How long will the North hold out, North and South Korea