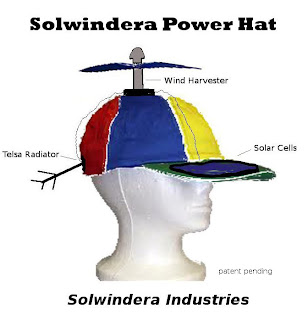 In spite of the so-called 'shale oil experts' like Phil Flynn of PFGBest, who are currently touting the feasibility of harvesting billions of gallons of oil and natural gas from states like Ohio through the use of a dangerous technique termed ‘fracking’. It is with thankfulness that the US GOVERNMENT has once again come to the rescue of an endangered economy.

It was just revealed that, for years now, the Administration has been dumping hundreds of millions of tax payer dollars into a small start up company known as ‘Solwindera’; an operation so secret that not even its location was known until recently.

Termed the ‘Solwindera Power Hat’, the company of the same name stated that this device (which is worn on the head) may solve the energy crisis. And, it will do so without having to resort to ‘dangerous and subversive oil exploration practices’ used by the greedy capitalist oil enterprises. Environmentalists everywhere were seen to be shouting with joy as news of this device broke! Gone also are the fears of 400,000 new jobs opening up across the country whose sole purpose would be to 'poison America's groundwater'.

According to a teaser poster (see picture above) put out by the company, the Solwindera is said to be able to catch energy from both the sun and the wind –AT THE SAME TIME! Heretofore unheard of in any one device, the Obama crowd is waving their hands and pointing at the Republicans. Developer and owner Danomanno Dingo remarked to one reporter that, ‘this will be a game changer both for America and my company!’ He went on to say that while the device's inner workings are proprietary, “that baby really cranks out the juice in a high wind!” When asked where all the energy went, DanOmanno hinted that it is transmitted to the ‘nation's energy grid’ via a special ‘Telsa Transmitting Antenna’ which is attached to the back of the hat.  He went on to say that once ‘hundreds of millions’ of these hats were in service, our energy crisis would be over! No response was returned when one reporter said it would make any man who wore one look like a prick.

No price  has been announced as of this post.
Posted by Dan Owen at 12:21 PM