That old bridge over Bull Shoals! 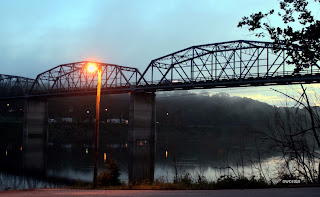 It’s been quite a while since the east 76 bridge over Bull Shoals was first built. That was way back in 1931 when gasoline cost ten cents a gallon and a new car purchase would set you back $640. Since that year, lots and lots of traffic has crossed this bridge and now in 2011, some eighty years later, its due for a face lift. The problem is corrosion and the number its doing to the metal truss bars that support the roadbed. They need replacement and the work will require quite some time to complete; as many as nine months, weather permitting.
The work, which was scheduled to start in 2013 was put off for a number of reasons. For one thing, MoDot officials felt that refurbishment repairs that were completed in 2009 would allow them to extend the time frame and secondly, nobody could quite figure out how to shunt traffic around this bridge during its repair without causing major headaches. 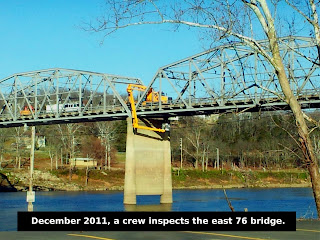 Every day, as many as five thousand vehicles cross the bridge as commuters go to and from work from areas like Cedar Creek to business communities like Branson and Hollister. Closing the bridge would mean a long detour on down 160 to Route 65. A process that would increase the congestion already present (as many as ten thousand vehicles travel Hwy 160 daily) and which would force some to arise at ungodly hours just to make it into work. Businesses like the National Enzyme Company would be severely affected as it has operations on both sides of the river! Also in the mix would be the added cost of gasoline and Diesel for everyone. No wonder then that MoDot along with other officials decided to put off the work until 2014. (Now, I hear they are even talking about 2015 and beyond….)
So, what’s the solution? Does putting this work off make the process any better once we arrive at 2015? What will be the cost of travel at that time? I dunno, but it will be interesting to watch won’t it?
As I see things now, there are three courses of action that will take place and I’ll outline them here:
1)      Close the bridge, do the work and hope people can find their way to work and home.
2)      Build a pontoon bridge across the river adjacent to the existing bridge.
3)      Keep kicking that old can down the road.
Closing the bridge with no way across!
We’re talking detour and it won’t be pretty. There will be two groups of people. Those on the Hollister and Branson side and those on the Forsyth and Cedar Creek side. Stuck in the middle will be people like myself who, though retired, would like to make trips into Forsyth to go shopping, etc. Now, even I will be looking at a long drive into Hollister just to find a grocery store! For commuters, I’ll guess that the detour will take a minimum of an hour for some of them to get to where they need go. Businesses in towns like Forsyth will more than likely suffer. People will be forced to quit their jobs and move. The list goes on and on…
Build a two lane pontoon road!
While I like this idea the most, it will be very expensive and could pose problems all on its own. The logical place would be somewhere close to the existing bridge as topographical considerations would make it difficult to place a bridge elsewhere. But, what if the river goes to flood stage! What happens then? Can they build a road structure with a thirty or more foot adjustable elevation capability? I’m not sure. In any case, there will be some congestion as a result of all the activity in that area which will make traveling a chore. And remember, this mess will go on for a long, long time!
Kick that old can down the road!
This is the ‘solution’ that I think is most likely. We’ve seen it in action on the nation’s capitol and I think it just might work in this case also. The thinking will be to just keep putting it off until something bad happens. Then point fingers at everyone else and finally fix the damn thing at five times the original cost. In other words handle the bridge in the same manner we are handling the national debt. Ignore it and maybe it will go away.
Posted by Dan Owen at 9:52 AM