How long until the rhetoric coming from Iran turns to war for the US? 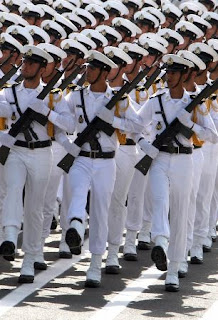 Let the sparing begin! Over the past few weeks exchanges between the US and Iran have ratcheted up in a series of proclamations from such officials as first, Vice President Mohamed Reza Ramitupme, and then, naval Admiral Habiboilbutt made statements as to their intent to close the Strait of Hormuz if American doesn't start towing the line. This was quickly followed by a rebuttal statement from the 5th Fleet's Lt. Rebecca Rebarich who basically told the Iranian government that they could shove it.

Iranian media has ralso helped fan the flames by describing how Iran could move to close the strait, saying the country would use a combination of warships, submarines, speed boats, anti-ship cruise missiles, torpedoes, surface-to-sea missiles and drones to stop ships from sailing through the narrow waterway. Armadadickajad was said to be literally foaming at the mouth over the prospect of 'getting it on' with the 5th Fleet; a force comprised of 20-plus warships, with about 1,000 people ashore and 15,000 afloat, consisting of a Carrier Battle Group, Amphibious Ready Group, combat aircraft, and other support units and ships.

The rhetoric form both sides is escalating and this author is wondering how soon war will break out and exactly what event or series of events will occur to make that happen. Check out this video from Fox News.

Disclaimer: This post by the author is solely representative of his opinions and as such may not necessarily be backed up by facts. In addition, the author has taken great liberties with the spelling of the Iranian officials names because, in point of fact, he could care less what they think!
Posted by Dan Owen at 1:48 PM

Email ThisBlogThis!Share to TwitterShare to FacebookShare to Pinterest
Labels: 5th fleet poised for action in the Strait of Hormuz, Danomanno, Forsythkid, Iran readying for war