Charlie's announces it will be smoke free starting Nov 13!


Forsyth MO. - In a move that was surprising to some customers (me included), Charlie's Steak Ribs and Ale, located on Hwy 160 in Forsyth MO has elected to become a smoke free restaurant starting November 13, 2016. Apparently the owner, who was forced to make his Branson locations smoke free due to local ordinance decided to go ahead and extend that restriction to his Forsyth location even though no such city ordinance exists. 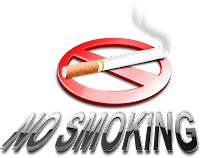 That leaves just one other bar/restaurant in the area, John's Frosted Mug as a nearby location where smoker's are allowed to drink and smoke. And, while the author does smoke himself, he can understand why some of the regular customers might feel their rights are being infringed over the still questionable health risks of inhaling second hand smoke. Note that vaping is also not allowed..

My personal opinion is that a bar aught to be a place where a person can go and relax, and for some smoking is a key component of that experience. Over time, I also feel smoking will die out on its own...

On a good note, word will get around that the air has been 'cleared' at this venue....now if I could just convince folks that burning leaves is also a really bad idea...
Posted by Dan Owen at 6:00 AM