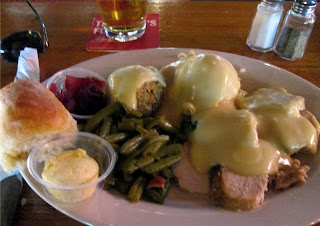 Forsyth MO. – It was an partly cloudy November the 24th when some hungry members of my community celebrated Thanksgiving at a local high school courtesy of Fat Daddy's restaurant along with some of the area churches. There were also great meal deals offered at John's Frosted Mug and at Charlie's. Curiosity, (and my empty stomach) drove me to go and investigate these events!

While I didn't go into the High School cafeteria, I did note that the parking lot was already pretty full right after the 1:00 hour, when they opened. The Frosted Mug had light traffic at the 2PM hour while Charlie's had only a sporadic turnout. 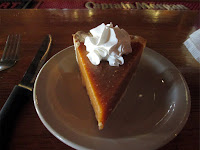 I did eat at Charlie's with a friend and would say that it was one of the better meals I've had. The pumpkin pie desert, in particular, was awesome!
Posted by Dan Owen at 3:58 PM

Email ThisBlogThis!Share to TwitterShare to FacebookShare to Pinterest
Labels: Forsyth High, Thanksgiving, the Mug and Charlie's