Steak with stir-fried peppers and onions!

Take a braised steak and combine with some stir-fried banana peppers, sliced onion, oregano, rosemary and dried basil and you've got yourself a great start to any breakfast!

Throwing together a tasty breakfast that's under 500 calories takes a bit of planning. This meal deal combines a small portion of steak (100 grams), that is grilled for a few minutes in a convection oven. To this is added a small batch of stir-fried home grown banana peppers (40 grams), onions (35 grams). The spices included a dash of dried Rosemary, and a teaspoon each of dried oregano and basil. Those guys added only about 350 calories to the total meal and when you added a cup of milk it came to 476 calories all told. See! I'm really trying to lose some weight here! Hey Washington DC! That's a hint! I'm trying to slim down and perhaps you should too!

Rumors abound, these days on Capitol Hill, that Nancy Pelosi is on the way out! Who would have figured that such a nice, sensible woman would fall into such disfavor. Perhaps it's because the Democratic Party is currently holding a fire sale and she is their poster child. Fare thee well Nancy, I knew you not!

Future site of the DNC? 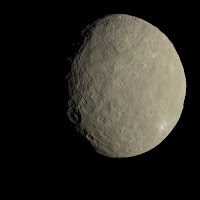 I went to no expense to grab a picture of the proposed new location for the next Democratic National Convention. It's a small 'planet-toid' named Ceres that is pretty far 'out there' in the Oort Cloud someplace. Now, while the surface of the site is rather cold and bleak, I thought it a fitting location for a political party whose style of thinking is also often sorta 'out there'!

I'm hoping, from time to time and over the coming decades, we hear from these people... Sorry, that's a fib.

Mediacom, WTF is wrong with you?

Over the weeks, month and years that I've been forced to subscribe to Mediacom Internet service, I come to realize what the word incompetent really means. By far and away, this cable company's managers are the most sorry bunch of failures and CF's I've ever had the displeasure of being associated with. I pray the new incoming President will make it a priority to draft legislation to help and escort these bums out of a business they are so ill-suited to perform.
Posted by Dan Owen at 9:35 AM