Evil incarnate – I give you the Muslim Brotherhood. 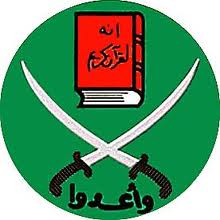 CAIRO – The Muslim Brotherhood is scrambling to broaden its appeal to liberals, leftists and Christians after official results Monday showed that the Islamist group's candidate will face ousted autocrat Hosni Mubarak's last prime minister in next month's runoff for president of Egypt.

Violence flared late Monday when several hundred people ransacked the Cairo campaign headquarters of the ex-premier, Ahmed Shafiq. They smashed windows, threw out campaign signs, tore up posters and set the building on fire, according to witnesses and security. No one was hurt. The office is in a Cairo residential neighborhood.

Please mark these words - The Muslim Brotherhood is, in my opinion, the closest thing in this corporal world to a living Satan that has ever existed. Of the rest of the the Muslim people - I embrace and love them.
Posted by Dan Owen at 5:01 PM

Email ThisBlogThis!Share to TwitterShare to FacebookShare to Pinterest
Labels: Danomanno, Forsythkid, Muslim brotherhood the most evil force in the world