A must read book for the younger generation! 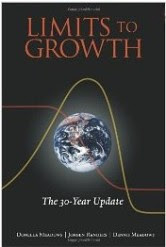 On bookshelves right now is a publication that was literally thirty years in the making. Originally published in 1972 by a group of scientists from MIT, it computer modeled global resource consumption and production. What they wrote shocked the world and created vigorous conversations about the concept of ‘overshoot’ or resource use beyond the carrying capacity of the planet.  Back then, the book was optimistic about the future of humanity as even the most dire computer model showed things would not start to get bad until 2015 or so. What???

Now, The Limits to Growth: The 30-year update, has taken on the tone of a dire warning, citing that many of the  ‘tipping points’ have now come and gone with even the more ‘optimistic computer models’ portraying a very bleak and sad future for men and women who are just now coming of voting age. This piece of work is a must read for us all, especially those who might what to prepare for what is to come.

This chart, taken from the book, is an example that chronicles in stark fashion where we are all headed.