NY to try and ban the Big Gulp and other large drinks? 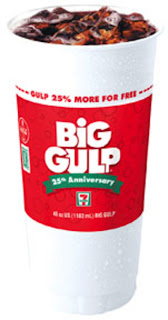 The sin-tax sheriff is back on the job.

New York City Mayor Michael Bloomberg is proposing another ban on unhealthy foods. This time, he wants to outlaw super-sized sodas and other sugary drinks.

The first-in-the-nation ban would limit sweet drinks to 16 ounces at venues across the city ranging from restaurants to street carts to movie theaters -- that means those extra-large cup holders at Lowe's are about to get awfully lonely.

No word, yet, on any plans to levy special 'weight taxes' on the obese. But, I'm sure that's coming....